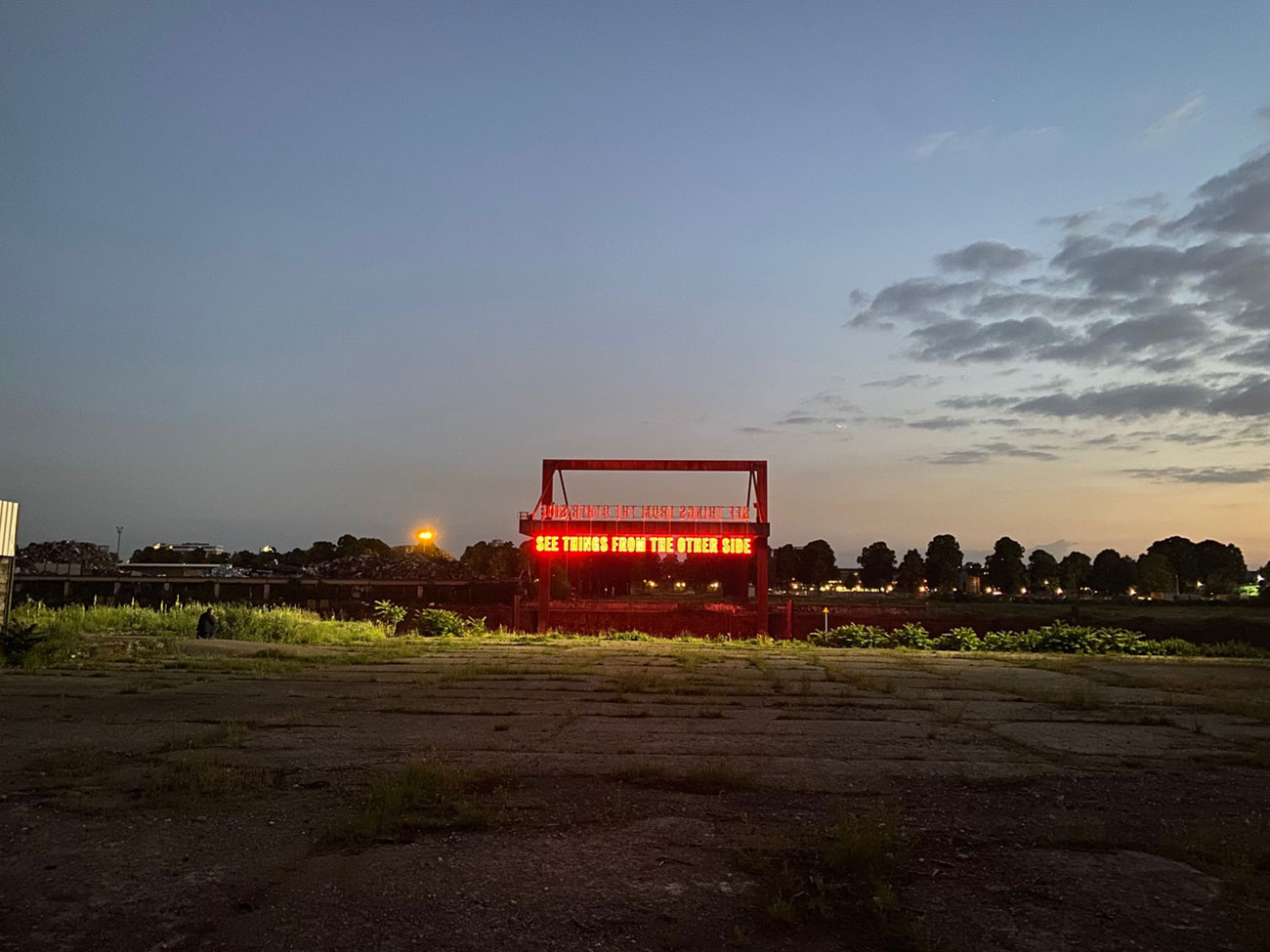 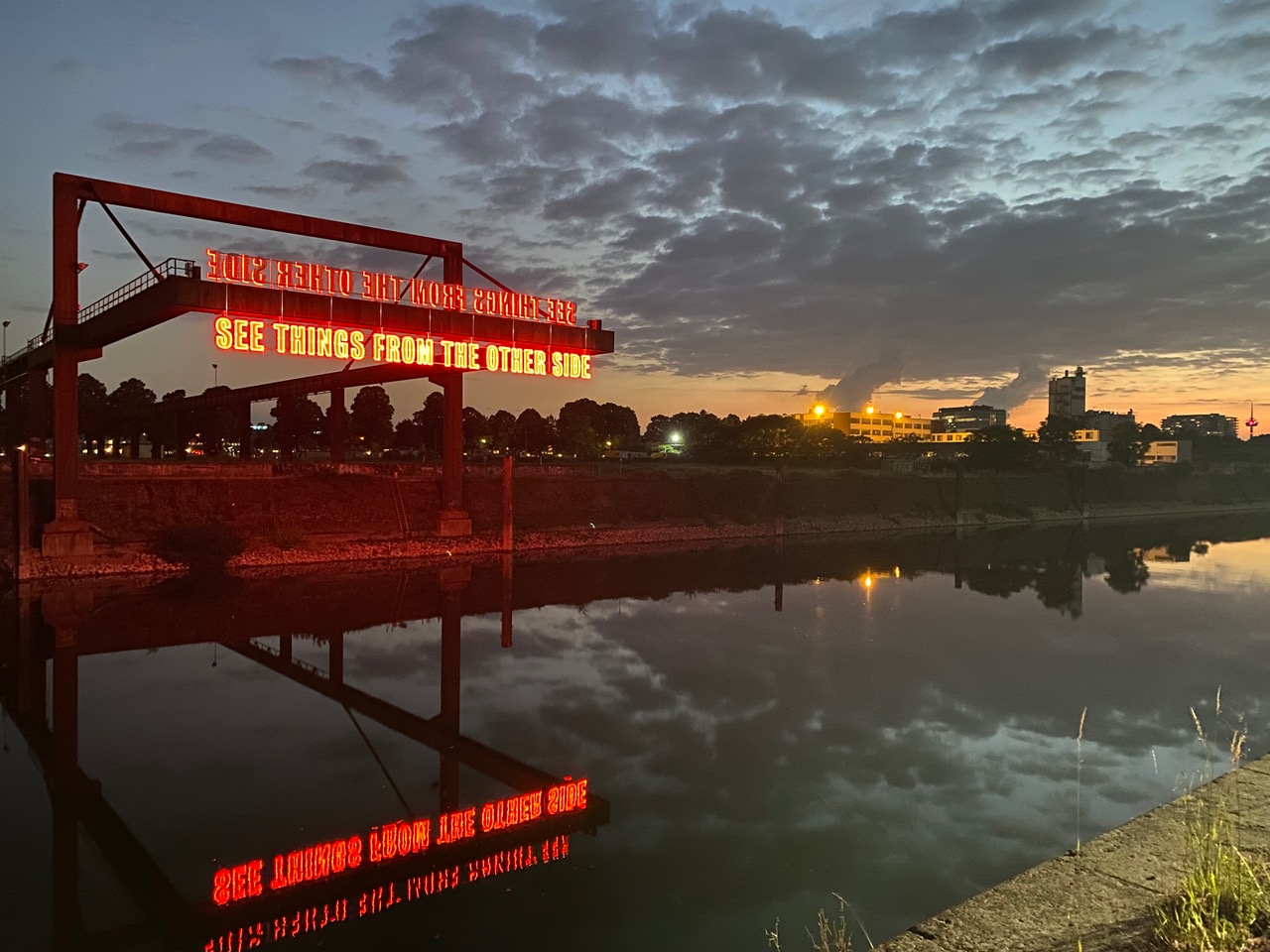 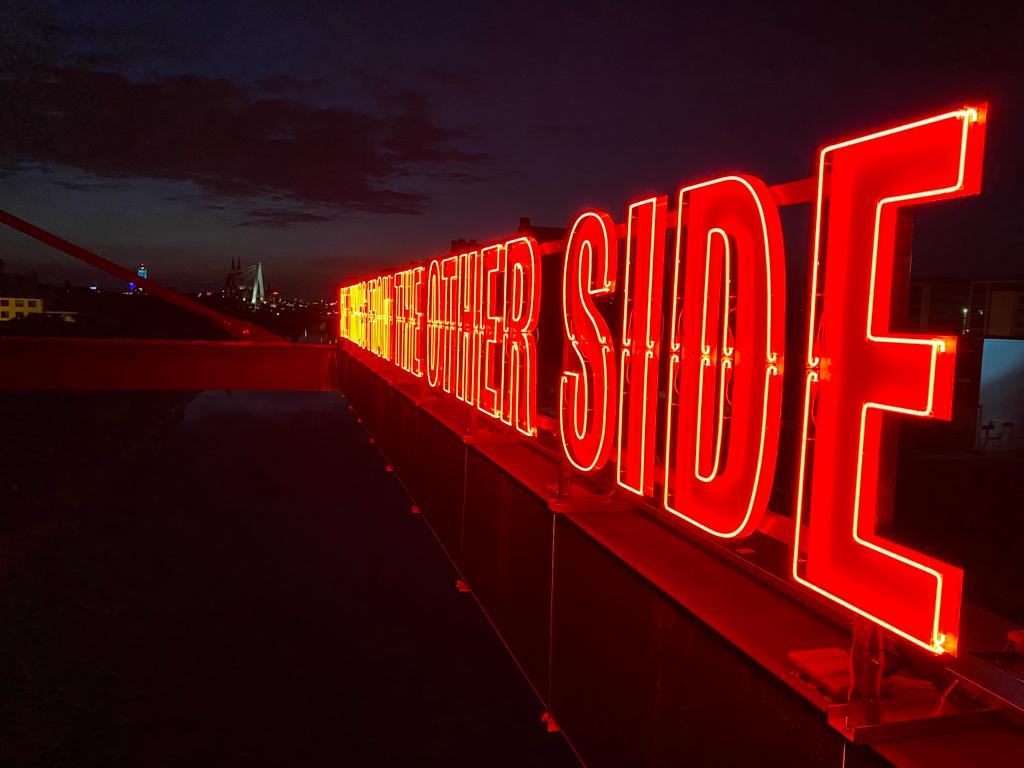 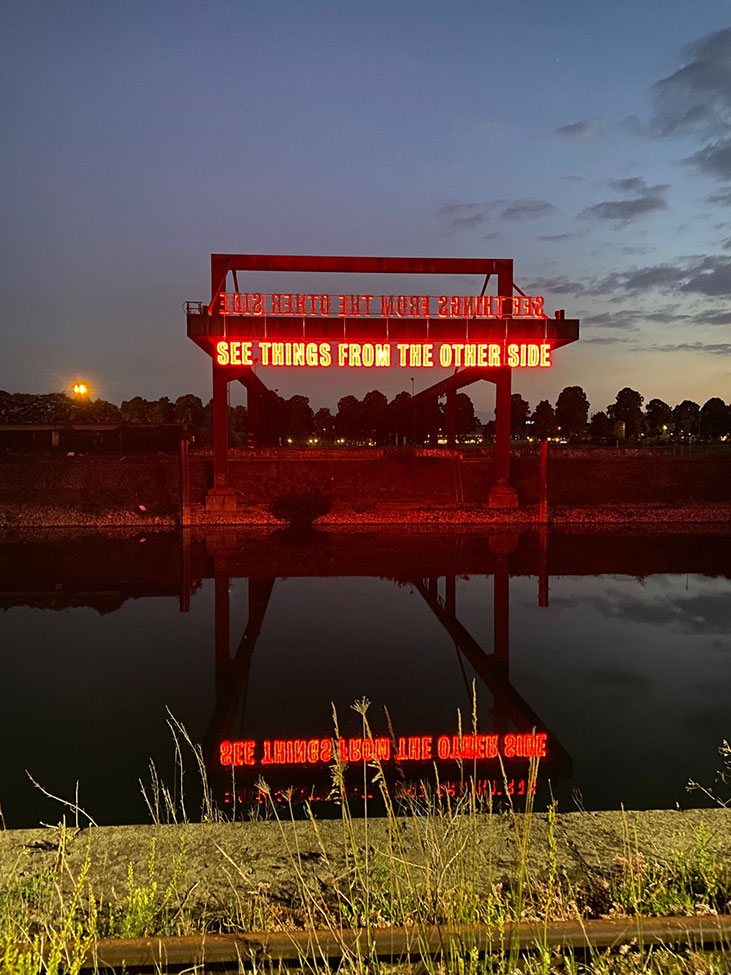 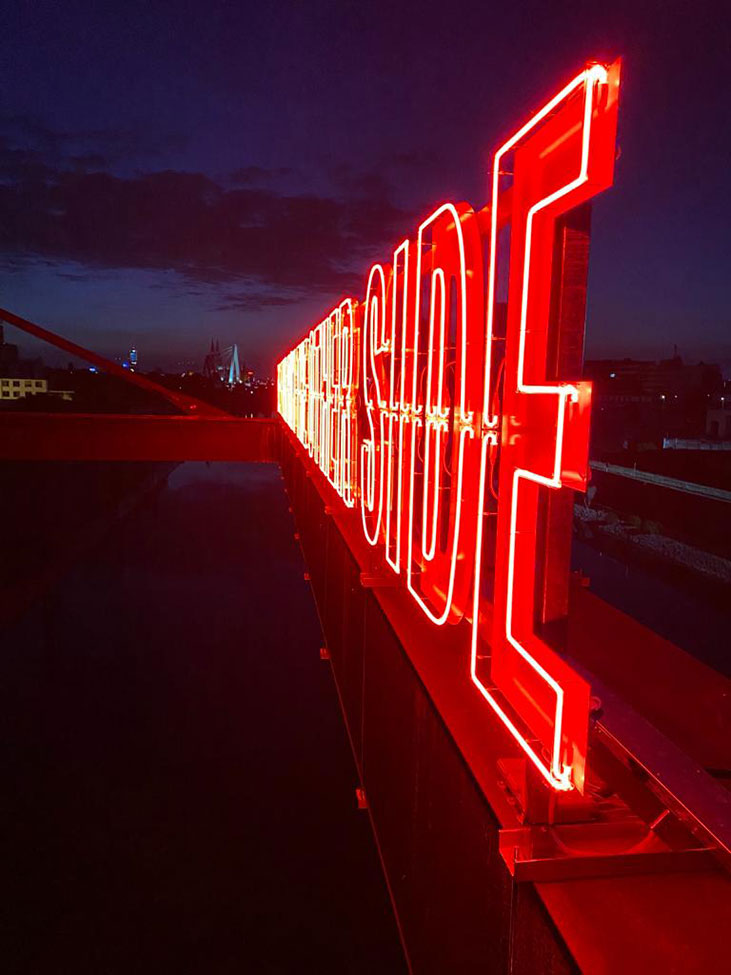 TIM ETCHELLS – FROM THE OTHER SIDE

A Question of Perspective

From the Other Side is a large-scale neon work commissioned by moderne stadt for Deutzer Hafen in Cologne. Installed on the derelict structure of a 29m wide industrial crane, the work presents its full text SEE THINGS FROM THE OTHER SIDE in two directions, one facing the Rhine, the other facing Deutzer Hafen itself, towards the iconic Aurora Flour and Ellmühle. FROM THE OTHER SIDE offers a playful, contradictory experience no matter where it is viewed from, with its rich red neon text on white Dibond letters that can be seen both the right way round and in reverse at all times. The work asks the viewer to somehow look at things from a different perspective, drawing attention to where we are in relation to the city, the harbour and the wider landscape. At the same time, From The Other Side speaks to the dual spatial and narrative context in which it is situated – the two sides of the river and the harbour, the two sides of the city with their different social and economic histories are all echoed in the installation.

The arrival of the artwork FROM THE OTHER SIDE marks the start of the design of a new urban quarter at Deutzer Hafen in Cologne. It is seen as a symbol for sustainable urban development and a future living space in which art plays the same role as mobility, climate, mixed use and intergenerational forms of living.
Etchells’ neon and LED pieces often draw on his broader fascinations as an artist, writer and performance maker, exploring contradictory aspects of language – the speed, clarity and vividness with which it communicates narrative, image and ideas, and at the same time its amazing propensity to create a rich field of uncertainty and ambiguity.
Through simple phrases spelt out in neon, LED and other media, Etchells strives to create miniature narratives, moments of confusion, awkwardness, reflection and intimacy in public and gallery settings. Encountering the neon sign works, in the streets of a city or in the space of a white cube gallery, the viewer becomes implicated in a situation that’s not fully revealed, or a linguistic formulation that generates confusion or ambiguity. As often in Etchells’ work, in the neons the missing parts of the picture are as important as the elements that are present. Invoking a story, or projecting an idea out-of-context, the work invites us in, but into what exactly we can’t be sure.

As a writer, performer, visual artist and leader of the post-dramatic performance group Forced Entertainment, Tim Etchells is multi-faceted. His recent installations in public space have included the work QU’Y A-T-IL ENTRE NOUS? for the façade of the Centre Pompidou in Paris 2021 and more recently for the PACT Zollverein Essen (2022) the work SHIFTING GROUND.

TIM ETCHELLS – FROM THE OTHER SIDE